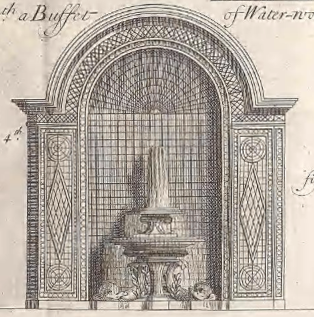 Treillage is French for trelliswork although the meaning is more complex. Treillage refers to trellis of a highly developed form both artistically and architecturally. Transennae or Trellis Screens are the pierced walls of classic architectural origin. The Dutch and French achieved a high level of refinement in earlier centuries, creating arbors, galleries, summerhouses and more with a keen eye for proportion and decoration. At FINEHOUSE we are reviving the art while utilizing modern materials and methods. When we speak of Treillage we are referring to the entire assembly of component parts used to create a project of excelling and refined beauty. 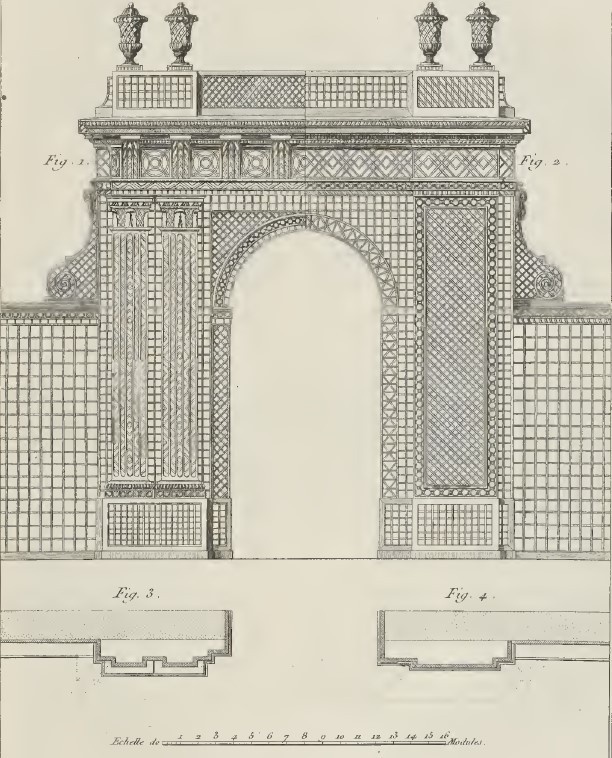 To learn about architectural trellis offered by FineHouse, see here

Throughout the US at lumber yards & big box stores, the following are a typical offering of trellis panels. 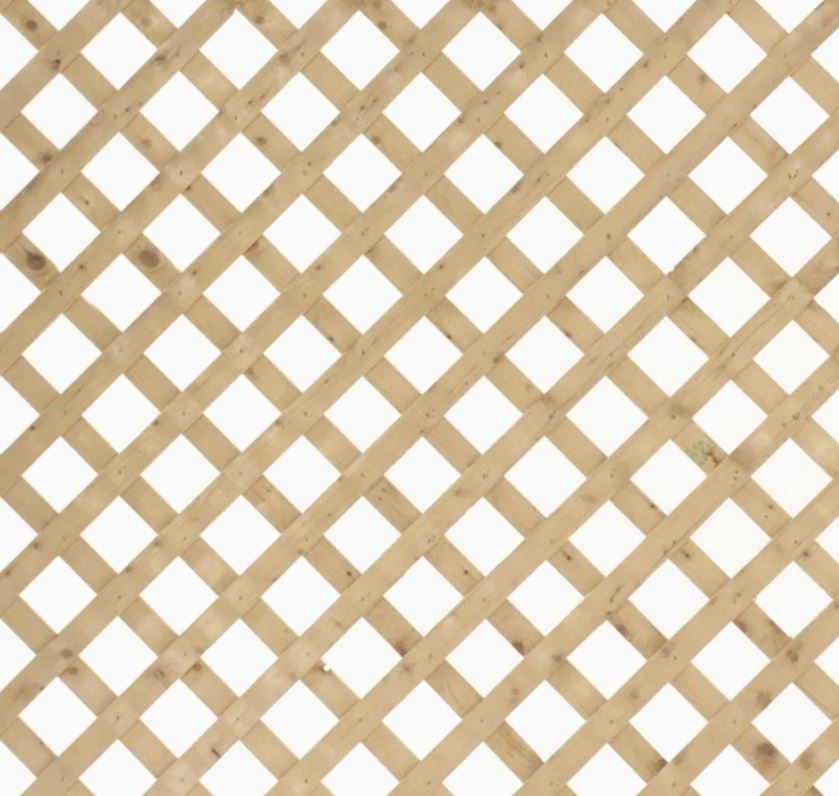 Pressure treated trellis is the most widely available and cost effective pre-made trellis on the market. This material offers a weather resistant alternative to untreated wood. However, this type of material has some drawbacks. If left unstained or unpainted it will turn a weathered grey over the course of a year. This will reduce the overall lifetime of the material. 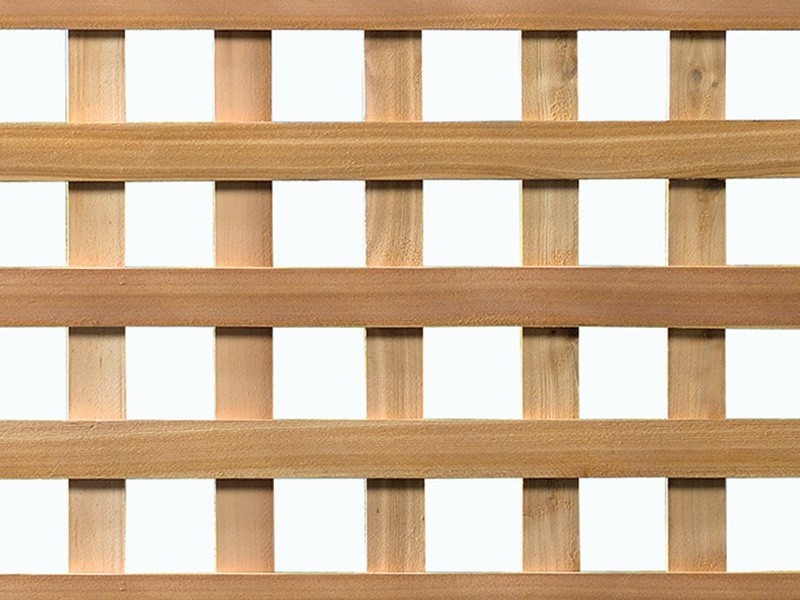 Cedar trellis offers a more handsome and durable wood than you would get with normal pressure treated lumber. With application of the proper stain this material will last far past its alternatives with little change in color and durability. 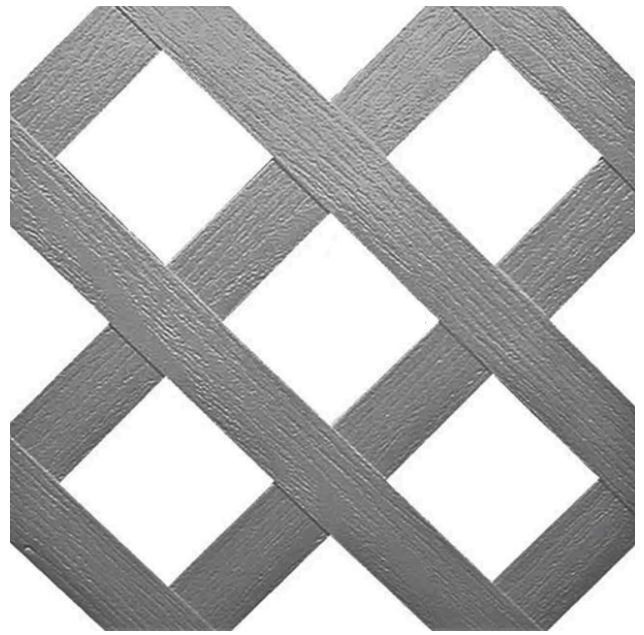 Vinyl trellis is the middling of the three for cost effectiveness. This material will last longer than pressure treated woods. Towards the end of its life it has a tendency to become sun-bleached and brittle.

FineHouse offers a range of architectural trellis panel sizes, gauges, and styles in a selection of materials including Accoya, Cedar, and Mahogany.

Although Pre-made trellis is readily available for easy installation it is sometimes more desirable to build on site due to the increased options for materials and construction methods. Site built trellis can often times be more architecturally sound working with the existing architecture and site conditions.  See the examples below. 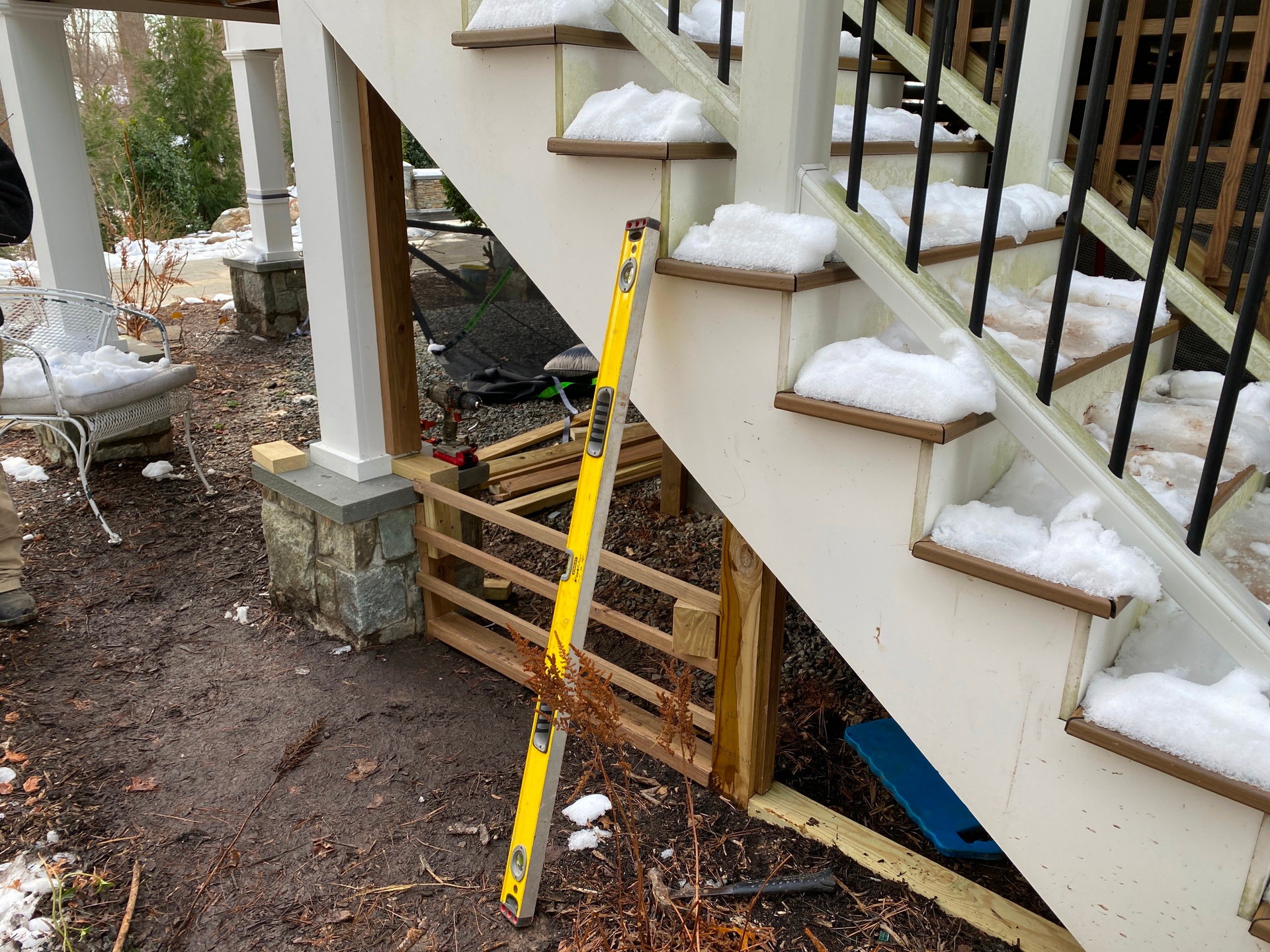 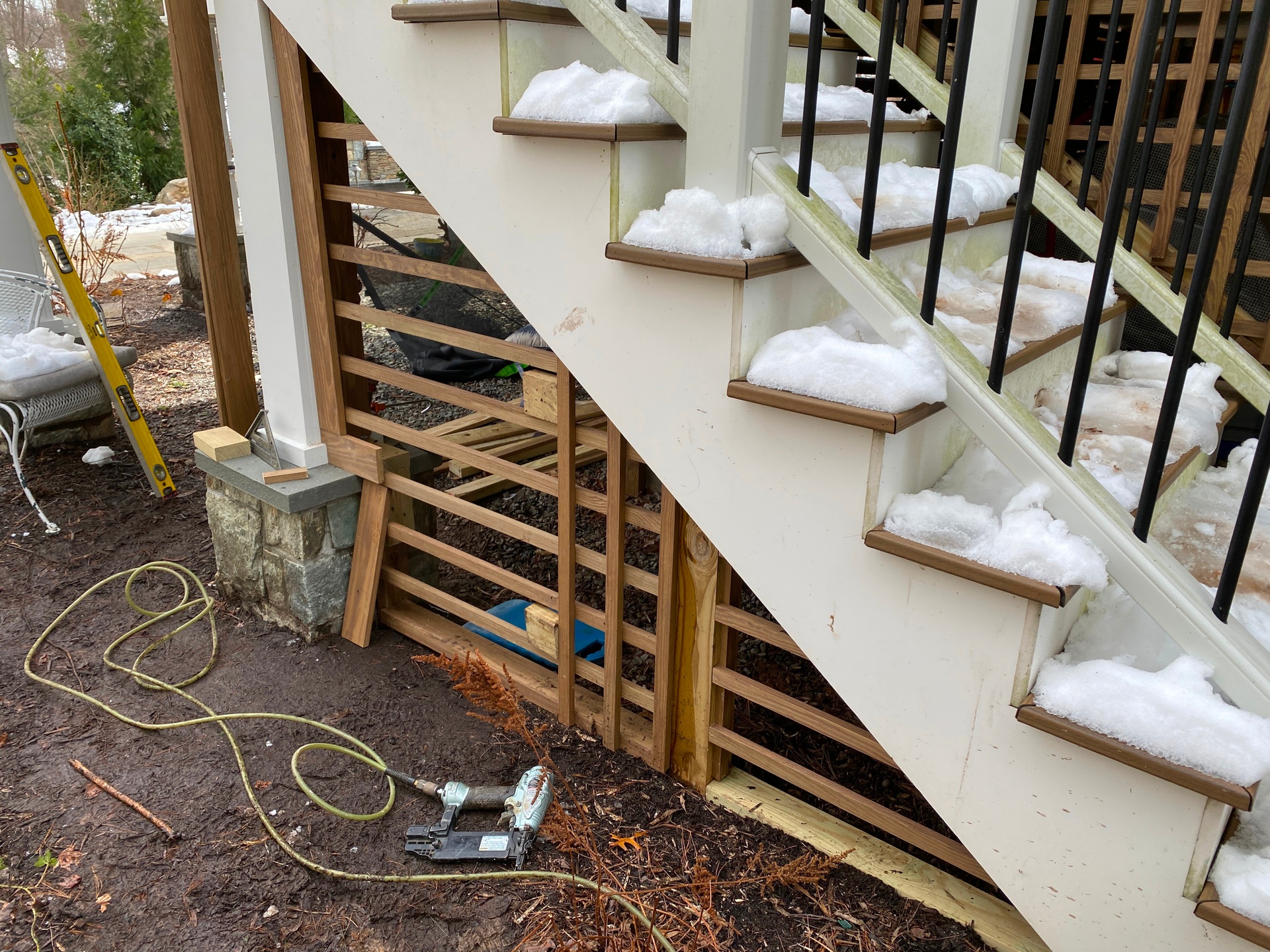 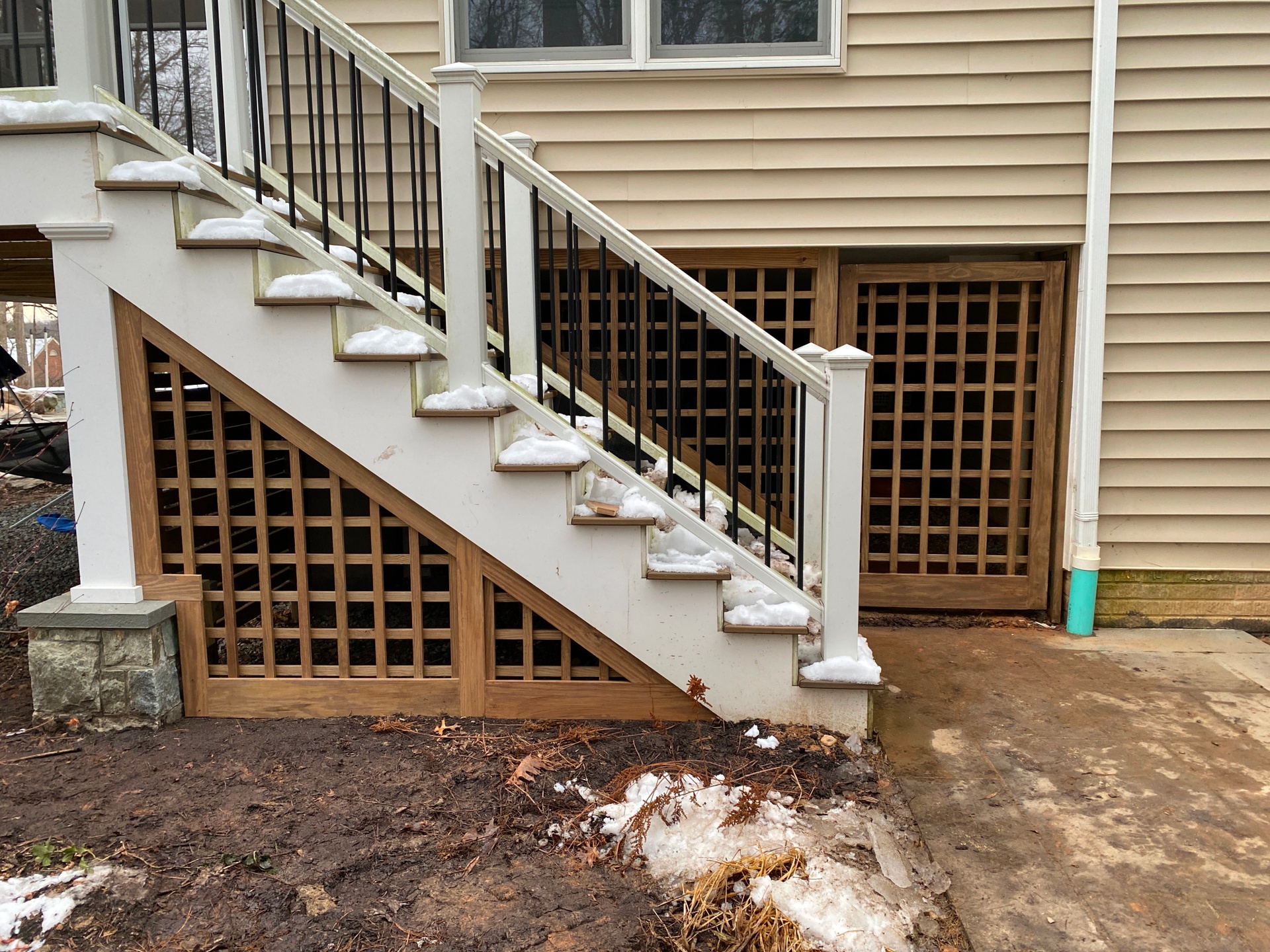 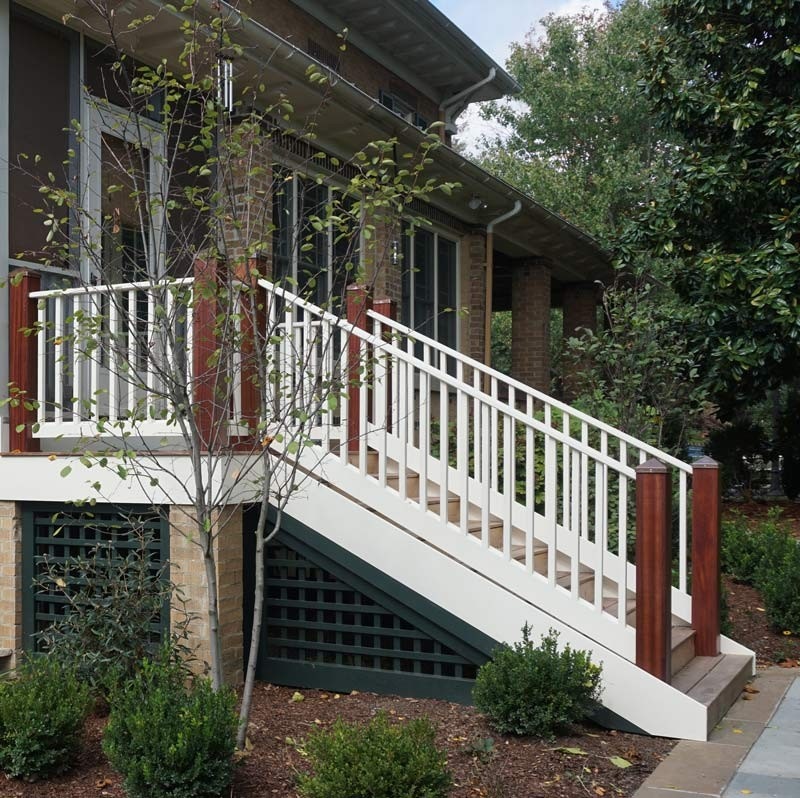 Another Example of Site Built Trellis

Certain millwork firms as well as FineHouse offer custom pre-fabricated trellis that is a much higher quality than can be obtaineed at a big box store, online or at a lumber yard. Below are some examples from FineHouse. 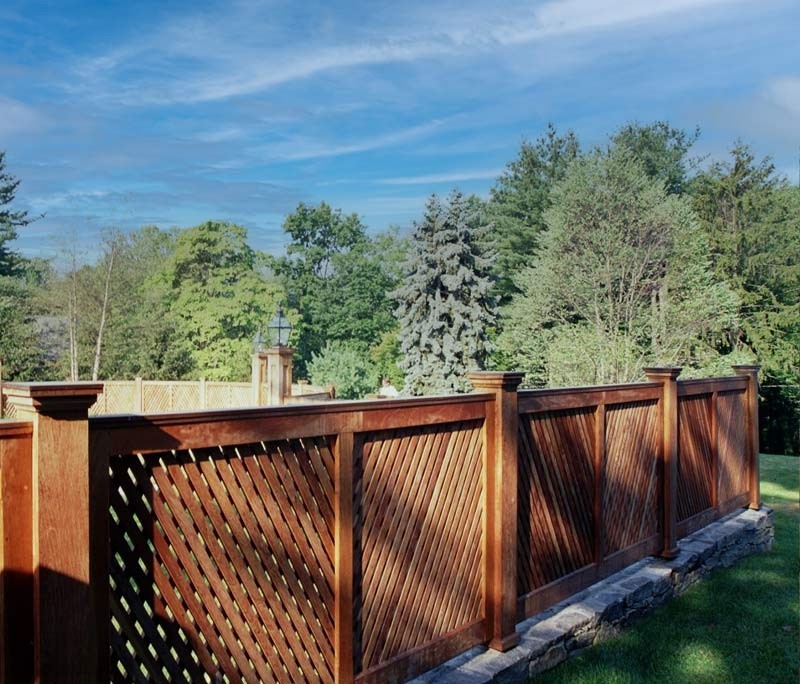 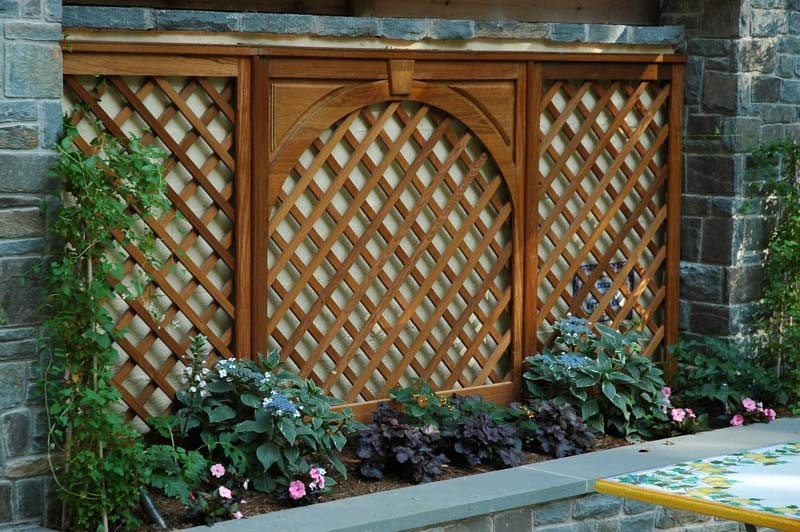 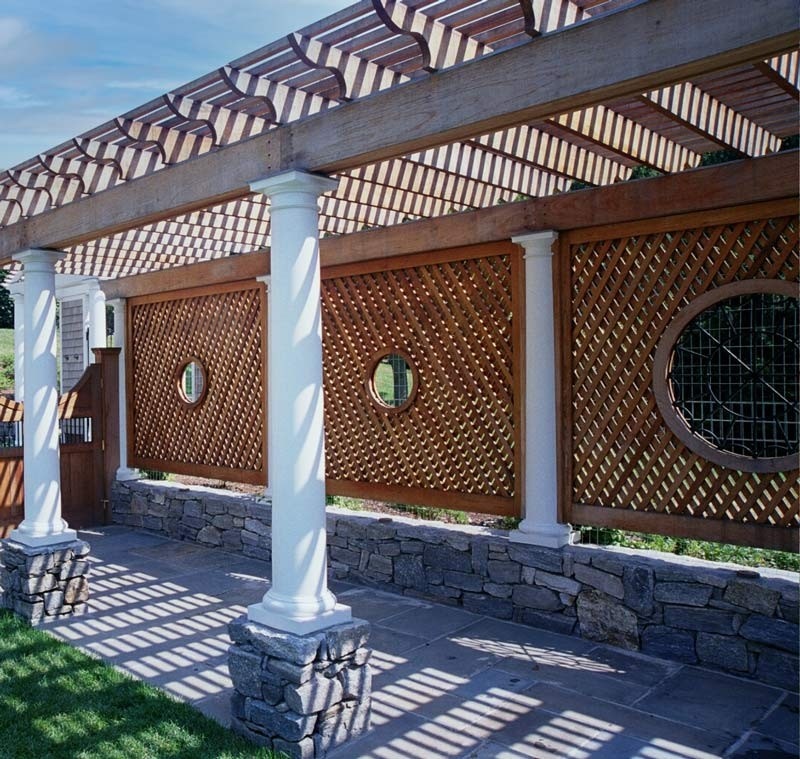 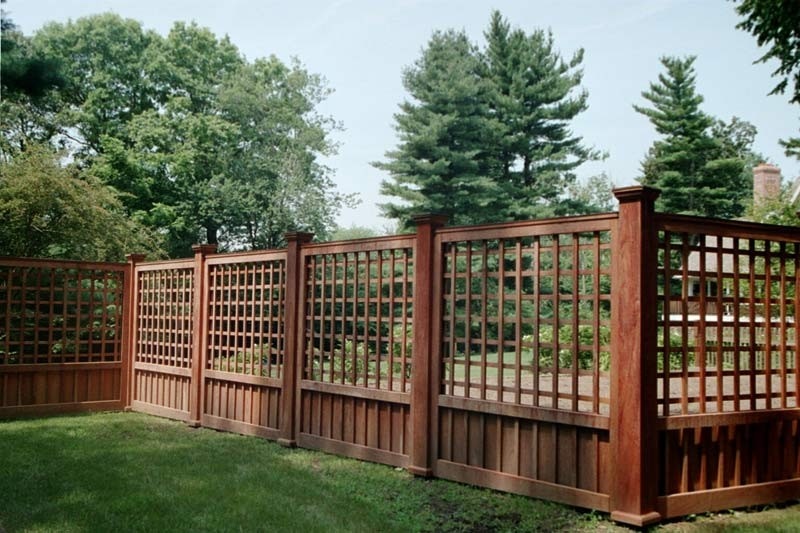 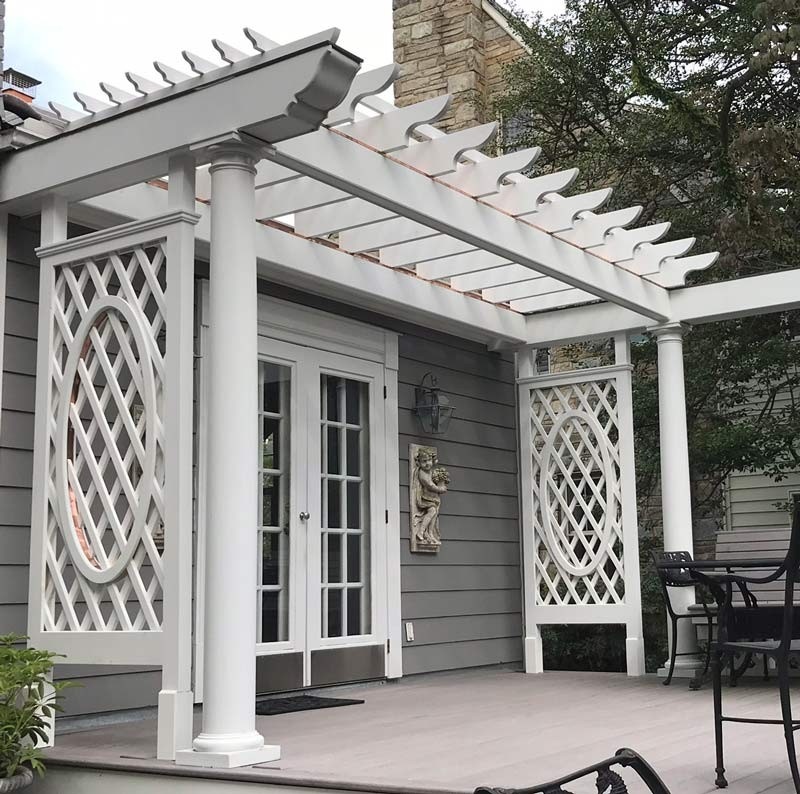 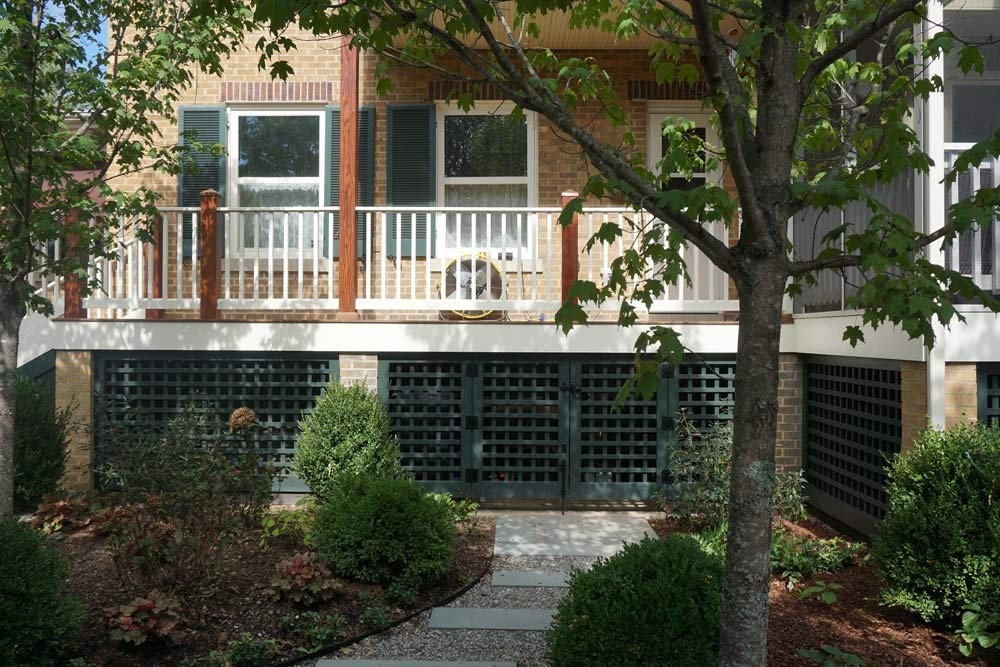 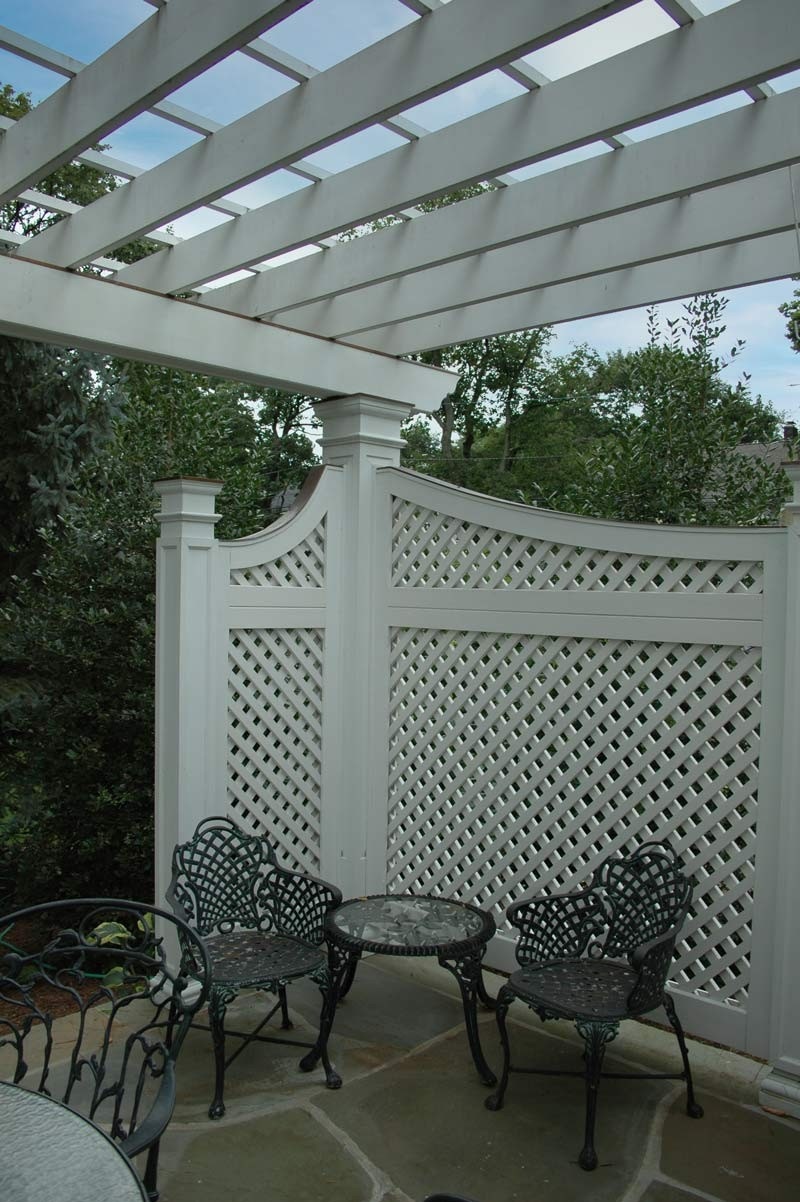 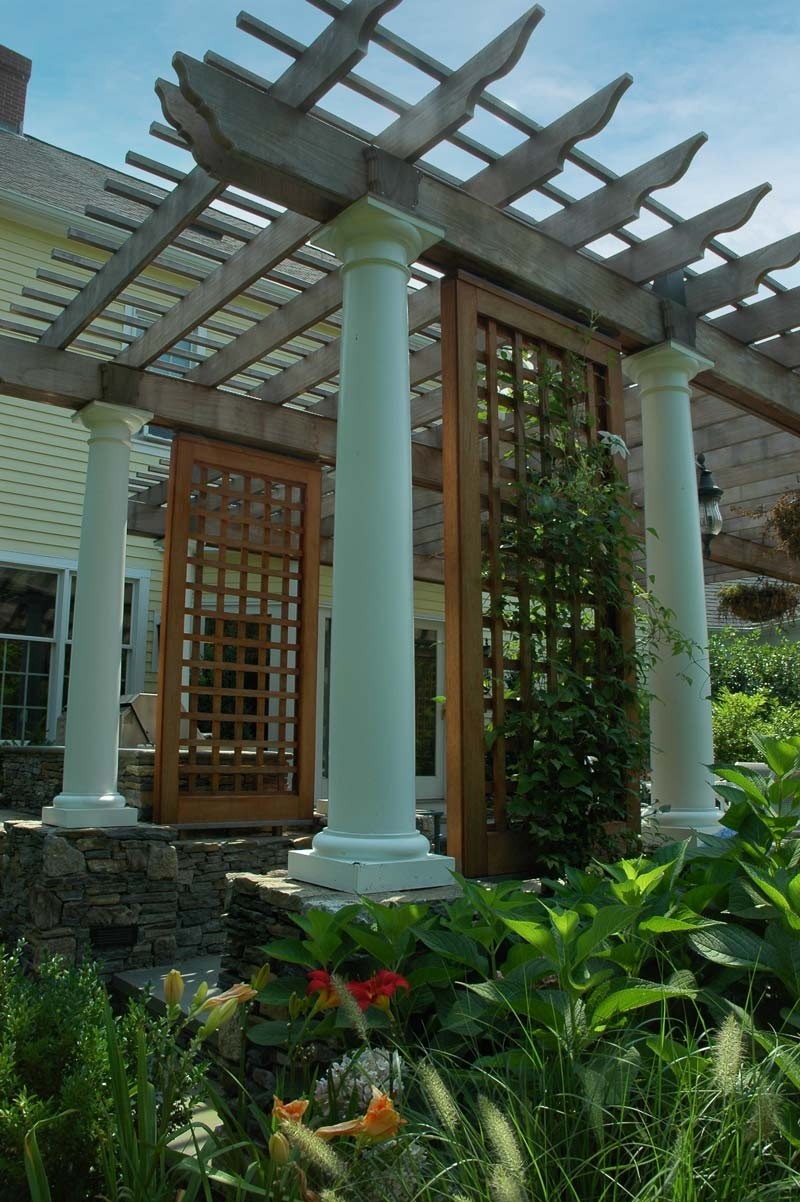 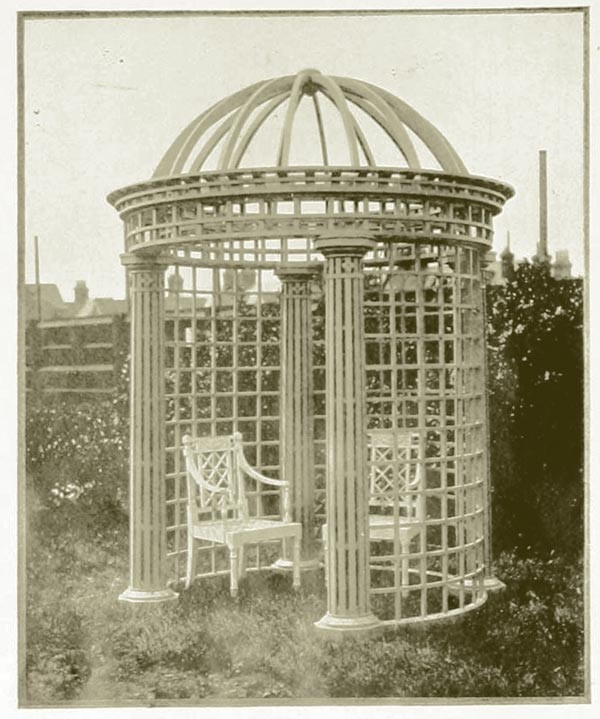 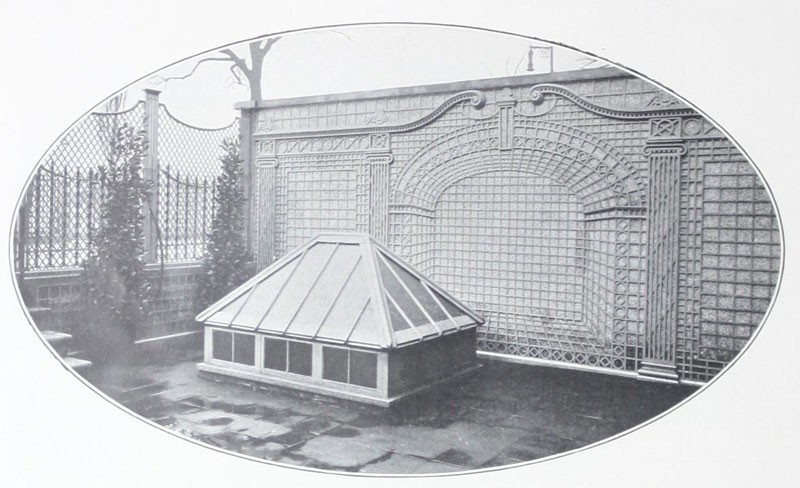 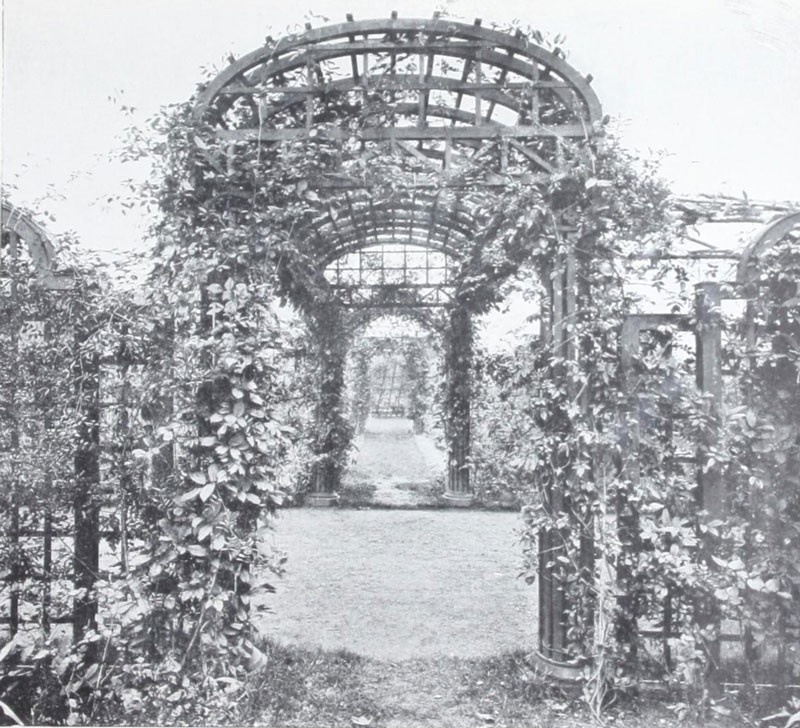 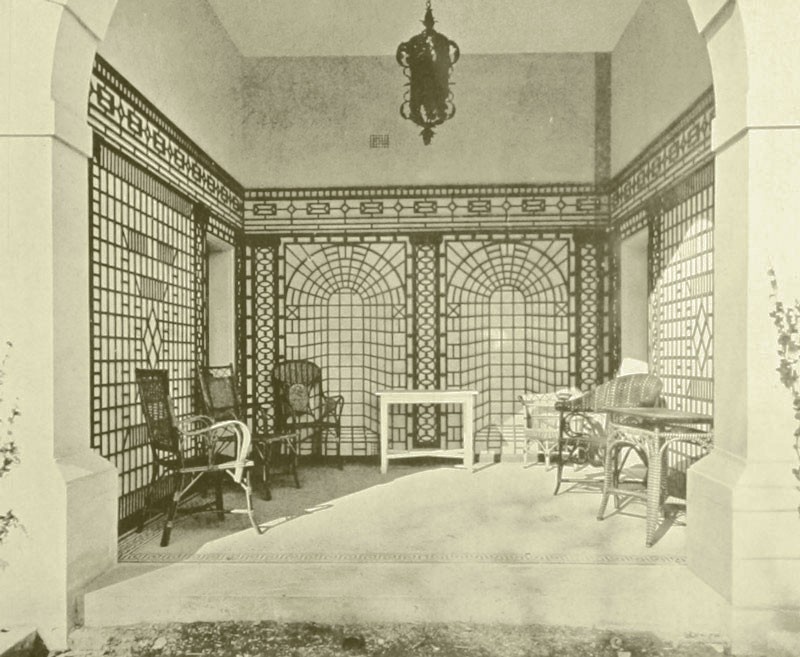 Trelliswork with Trompe-l'œil Applied to Walls 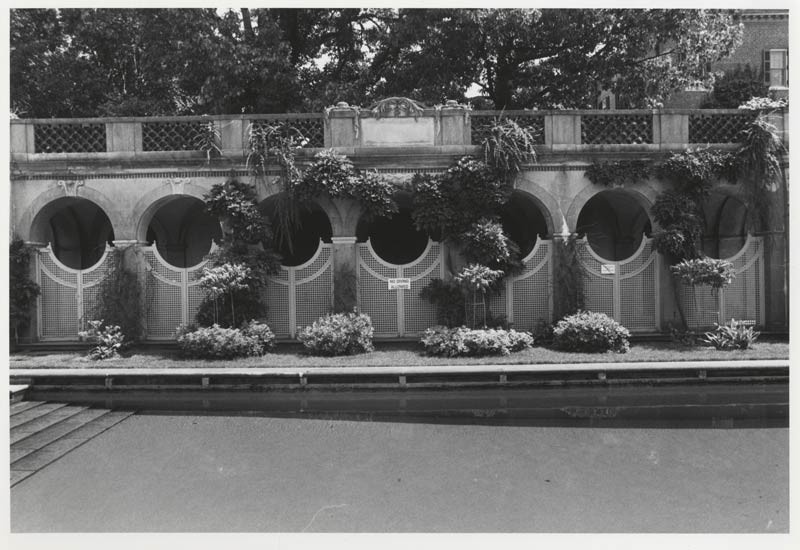 Trellis with festoon used for fencing 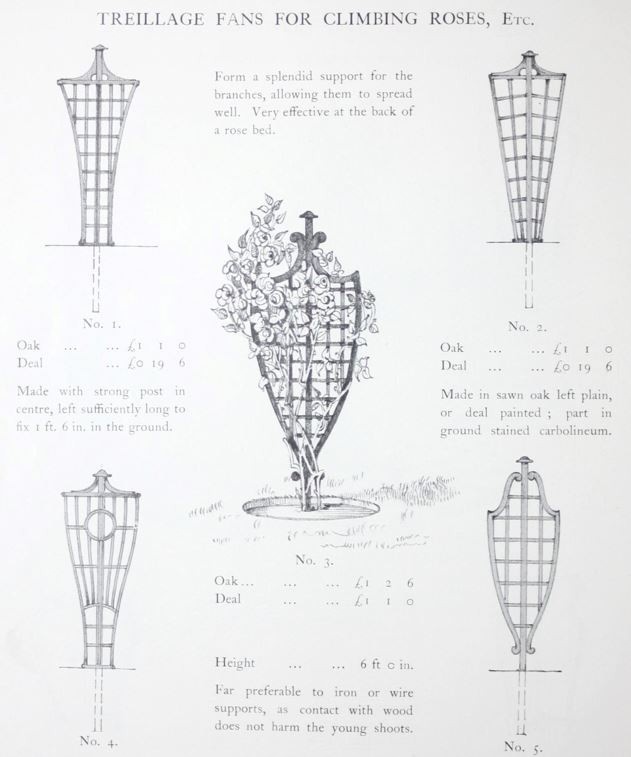 Treillage for Roses & Other Climbers

Understanding the differences, as well as the terms used to describe Trelliswork, allow you to communicate more effectively with suppliers, contractors, and architects. 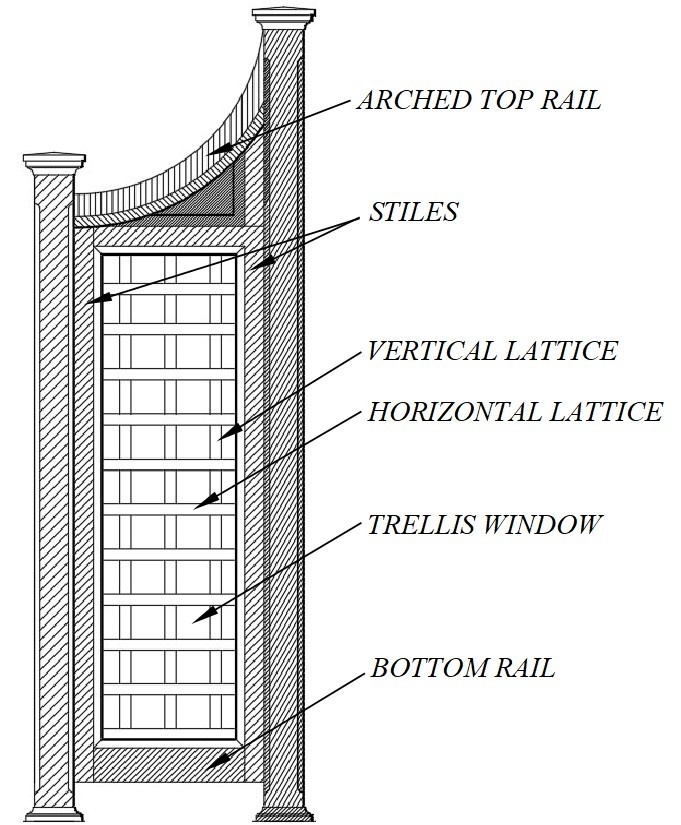 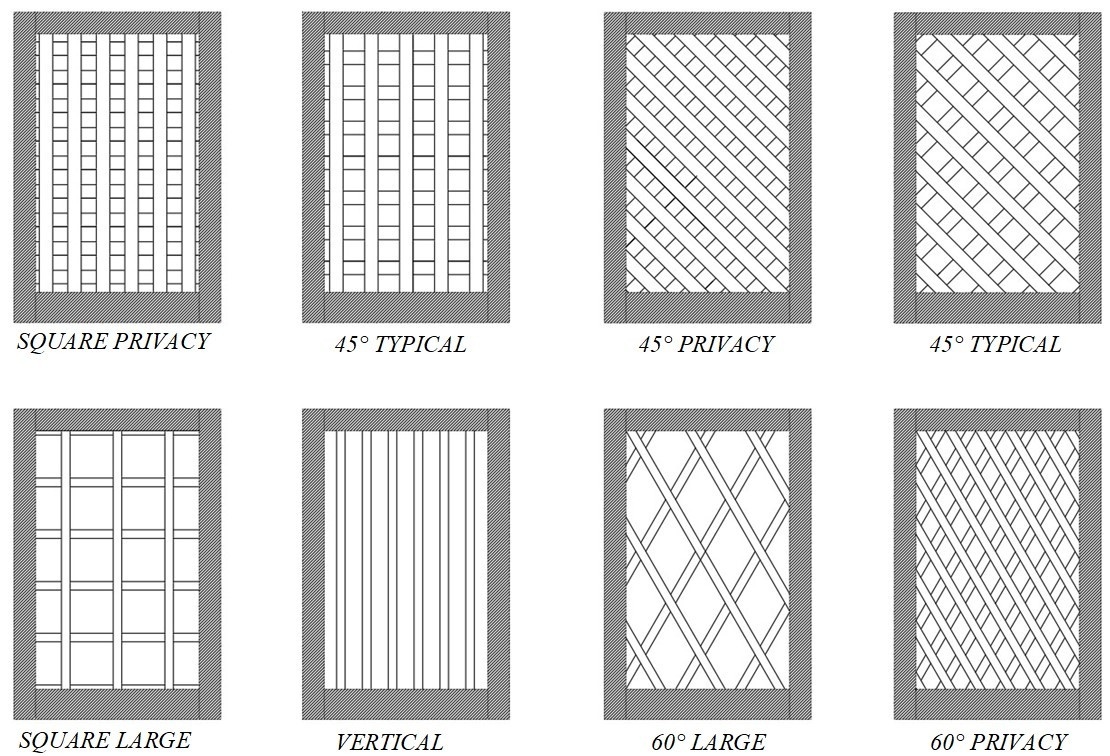 Abacus - a flat slab on the top of a column capital. The shape & edge profile vary with the type of capital.

Capital - a carved or decorated block at the top of a column.

Coffer - a variously shaped recess in the ceiling, vault or dome.

Colonnade - a row of columns, sometimes in a radius plan.

Corbel - a small projection in a wall, or supporting bracket.

Cornice - the upper part of an entablature.

Dentil - tooth-like projections in a cornice.

Entasis - the taper or bulging taper of a column.

Finial - a vertical projecting feature, typically at the top of a roof, but also at points on a freestanding wall.

Frieze - the middle part of the entablature.

Lath - individual strips used to make lattice. Typical thickness is 1/8" to 1/4" in commercial lattice, and 1/2" -3/4" in architectural trellis.

Lattice - the combination of overlapping lath strips in various patterns and spacings.

Pavilion - in classic architecture; a distinctive part of a building, usually on a corner or at the end of a long façade. Also, an isolated building.

Pedestal - a decorated stand for a column, statue, vase, or other feature.

Pediment - a triangular gable with cornice.

Pergola - a structure with columns, lintels or beams, rafters, and purlins. Sometimes including trellis in the overhead elements & between columns.

Peristyle - a row of columns surrounding a space within a building such as a court or internal garden or edging a veranda or porch.

Pier - an isolated  rectangular section of a supporting wall or foundation.

Pilaster - a column attached to and projecting from a wall.

Plinth - the square slab at the base of a column.

Portico - originally a colonnade, but now specifically a small porch with columns.

Profile - the shape of a moulding or other detail shown as a section or straight cut through the detail.

Ressaut - a section of entablature projecting outwards from a continuous entablature over similarly isolated columns.

Rossette - a formalized decorative representation of a flower.

Soffit - the underside of any projecting or overhead feature such as a beam. Also, another word for a ceiling.

Spandrel - the area of wall above an arch when it is set inside a rectangular opening.

Swag - also known as a festoon or garland. A bundle of flowers, fruit or other objects gathered together, draped from two supports, and tied with ribbons.

Transenna - a latticed fence or balustrade, in any material , most frequently used in antiquity.

Trellis - an assembly of lattice and trim elements such as; borders, stiles, rails, top caps, and arches.

Treillage - from early French garden architecture; an elaborate use of architectural trelliswork, often including elements such as columns, scroll brackets, entablatures, & pediments along with many others. Treillage is used to create features such as walls with trompe l'oeil, pavilions, arbors and other garden structures.

Trelliswork - a combination of trellis, trellises, and possibly other architectural elements, such as posts, mouldings, or arches, to mention a few.

Trompe l'oeil - (French: “deceive the eye”) in garden architecture and trelliswork, the illusion of depth of field or perspective is achieved through crafted millwork.

Vault - a curved roof or ceiling.

Window - the openings in a lattice piece 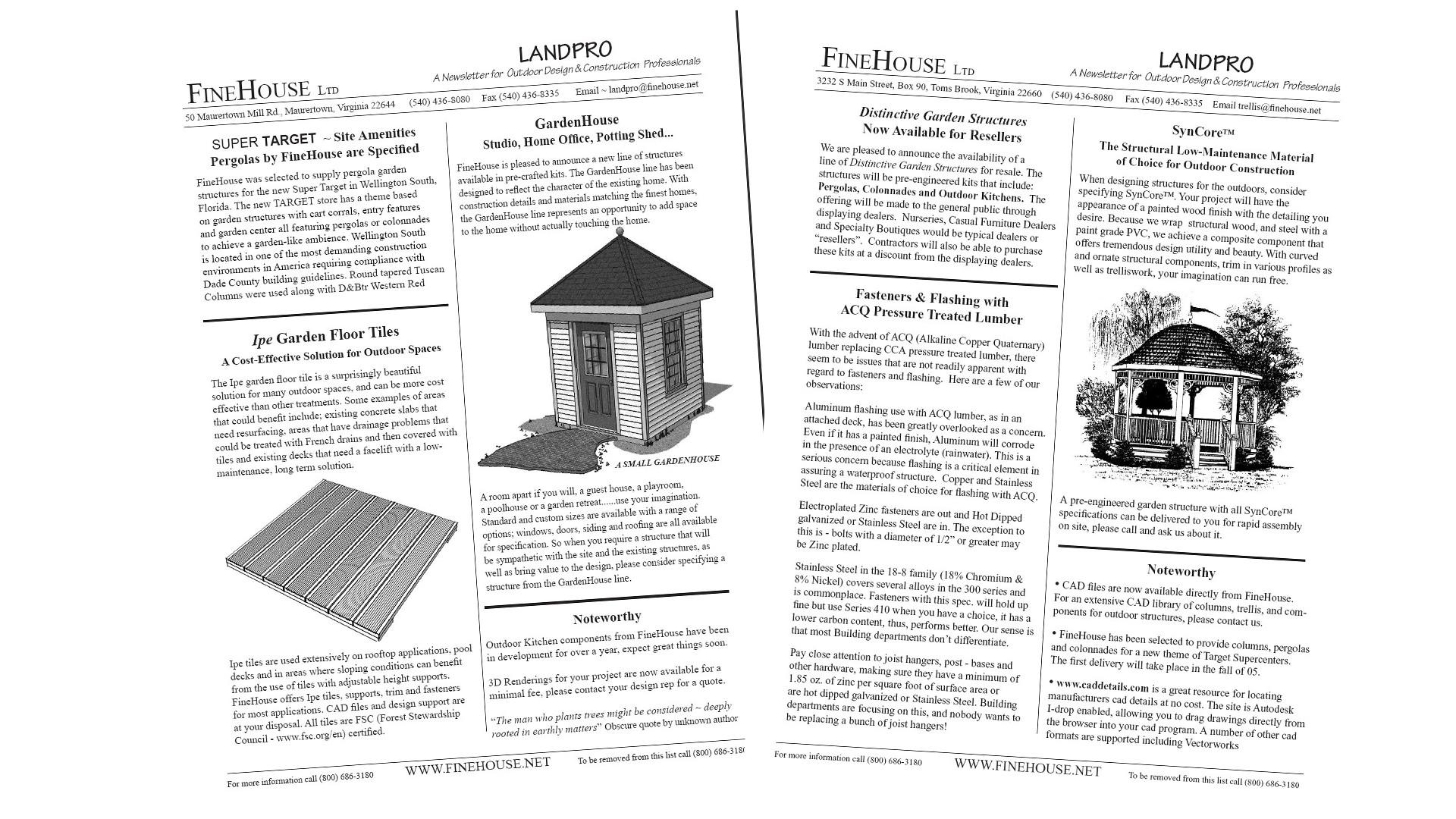